The New York Times: “…brutal and brilliant… Crawford’s writing is astonishing… crafted with the precision of a thriller, with revelations that sent me reeling.”

The Washington Post: “…a riveting, damning exploration of how a single moment can reshape an entire life… Crawford does what the best memoirists do… A stunning, audacious attempt to reassert power over her own story.”

The Boston Globe: “The rigor and elegance of Crawford’s sentences, even while writing about such painful things, lifts this memoir into literary heights.”

The American Prospect: “Crawford’s telling is beautifully rendered. She manages to convey, simultaneously, her own childhood self-recrimination and empathy for her childhood self.”

Minneapolis Star-Tribune: “Notes on a Silencing is as much a work of meticulous investigative journalism as it is a memoir …. But Crawford demonstrates another path to survival: elucidating, through a painstaking investigation and self-examination, how shame has been cast in the wrong place.”

Booklist Starred Review: “She gives a studied, vulnerable, and maddening account of her near-undoing and the school’s absolute obstruction of the truth. She melds her personae as a teenage girl, a survivor, and a skilled narrator, relating what she understood as she understood it, while also revealing her story’s upsetting course. Crawford’s meditation on the effects of silence, shame, and belief, and the antidotes she had to invent for herself, will add to evolving discussions of sexual assault and power.”

BookPage : Starred Review “Notes on a Silencing is a ghastly account, beautifully told, of a teenage girl learning that people in power often value reputation above all else.”

Refinery 29: “… a harrowing, powerful memoir about sexual assault, trauma, and what happens when institutional power is deployed as a weapon against the vulnerable …. Crawford’s bravery in recounting her own experience, though, speaks to how powerful it is to have these stories told, to show that no one is alone.” 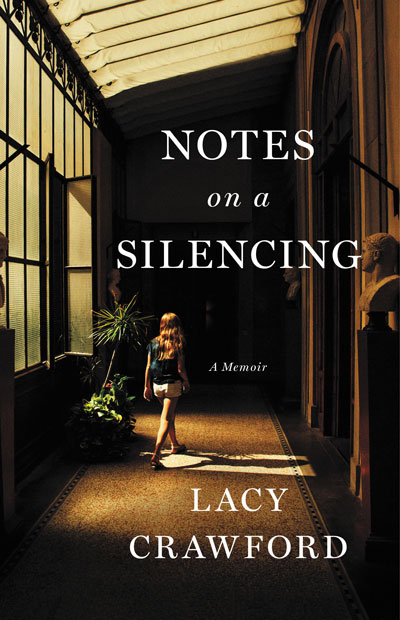 Kirkus: “Trenchant in its observations about the unspoken—and often criminal—double standards that adhere in elite spaces, Crawford’s courageous book is a bracing reminder of the dangers inherent in unchecked patriarchal power. A powerful, topical, and incisive memoir.”

“Powerful and scary and important and true.” —Sally Mann, photographer and author of Hold Still.